Arvixe, by and large, has had a very good reputation as a web hosting company. Their servers have historically been reliable and their support among the best. Unfortunately, as is the case with many hosts who grow to a certain size, they have been bought out by EIG. This apparently happened way back on October 31st, but no announcement was made by either company. The only way I found out was looking through WebHostingTalk.com to see if anyone else had been having issues with Arvixe’s uptime like my account has.

The founder and CEO of Arvixe, Arvand Sabetian, confirmed this in a thread on WHT (you can see the thread here): 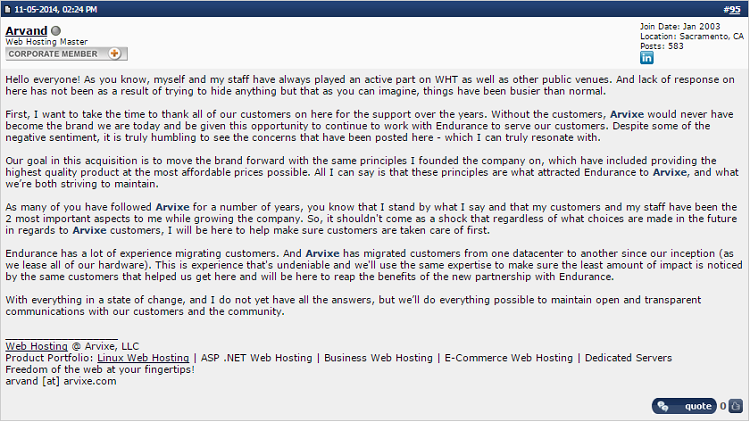 So what does this mean? Well, if past experience is any indicator (which it has been with EIG acquisitions), Arvixe’s reliability and support are going to go down in flames as soon as their servers are migrated into EIG. The same thing happened with HostGator in 2013, and most every other host that has been acquired before that.

It really kinda sucks. Arvixe had been a great host for years. They even had a page on their blog trying to lure customers away from EIG when they had a major data center outage. Kind of ironic that now those customers that did move to Arvixe during that time are going to be involved with EIG once again.

Time to remove them from my Approved Hosts page.