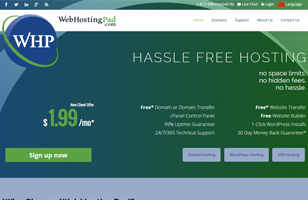 WebHostingPad has been in business since 2005. Since that time they have become the leader in inexpensive web hosting solutions, offering the cheapest web hosting in the industry. Don’t be scared off by the word cheap, because the WebHostingPad service is anything but that. They are a perfect fit for the beginner.

For as little as $1.99/month, or even cheaper with our WebHostingPad Coupon, you can get a full featured hosting plan for a personal or small business website. They also have business class hosting, but I chose to only test their personal hosting services.

The first thing you are going to notice about WebHostingPad is that they are cheap. Very cheap. Any review you read is going to put a lot of emphasis on this. Most other reviews leave it at that. I will try my best to explain how they can afford to offer such inexpensive web hosting a little later. The bottom line is that WebHostingPad provides you the same basic service that you should expect from any other web host, and you shouldn’t be scared off by how cheap the price is. While in most cases it’s true that you get what you pay for, you are paying for a great web host if you choose WebHostingPad.

Yes, I’ve been going on about price in this review already, but it is a point of emphasis here. In my experience working with several other hosting companies, I have learned a lot about how hosts can afford to offer such cheap hosting and still offer a good (or even great) service. WebHostingPad does this in two main ways. The first is that they don’t offer outrageous commissions to affiliates who promote their products. I won’t go into too much depth about this here, but if you’re interested in how that works you can read my article on How Affiliate Programs Work.

The second way WebHostingPad saves money for their customers is by offering their basic shared hosting plan as an a la carte type option. Many other hosting companies will offer a bunch of additional features and market them as great tools, thus justifying the higher price. The fact is that most of these additional features won’t be used by 80% of the customers. They are useless to the majority of people who own small personal websites. Instead of adding these on and increasing prices, they offer them as additional features that each customer can pay for individually should they decide that they need the service. In my opinion, this is a much more efficient and cost effective offer. 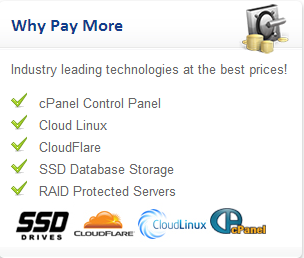 As explained above, you aren’t going to get all of the additional features you may get from other hosts, but this won’t take away from your ability to run your website. WebHostingPad offers the same features as most every other shared web host including unlimited disk space and bandwidth, a free domain name, 30 day money back guarantee, free website builder, and so on.

WebHostingPad also provides additional features at a cost like SSL certificates, SSH access, an advanced security scan, and more, but these are more suited for advanced web developers and business website owners. These tools are not going to be used by the vast majority of beginner and novice website owners, so why pay for them? They are an optional extra if you decide you need them at a later date, but this is how they save their customers from high prices.

You might expect your performance to be lacking because of how inexpensive WebHostingPad is, but that couldn’t be further from the truth. WebHostingPad’s servers are stable and reliable. After a 7 month test my website had a total up time of 99.942%, which is above their 99.9% guarantee. Server response time is fast and my websites loaded quicker than on competitors servers.

This is just a guess, but my assumption as to why the server speed was quicker than other hosting companies is due to the lack of the additional features on every account. Having these features running in the background on every account on a server causes more resources to be used on the back end, which in turn leaves less of those resources to be used on website functionality. Again, just a guess, but it makes sense to me.

WebHostingPad’s support team is generally knowledgeable and able to help quickly with easier questions that most beginners would face when starting a new account. The one gripe I have (which is the case with most hosting companies, not just WebHostingPad) is that only level 1 support is available over the phone or through live chat. If you have an issue that needs to be escalated to a higher department then you must submit a ticket. I will say that the response times of the tickets was quick, usually within 1 hour. In any case, the WebHostingPad support staff was able to resolve issues promptly and efficiently.

WebHostingPad is a great choice for beginners. It is cheap, easy to use, and reliable. You won’t get some of the features that other hosts include, but these features are not useful for customers who are new to web hosting. It is a great starting point for a new customer and it will get you familiar with how to run a website without being too overbearing. 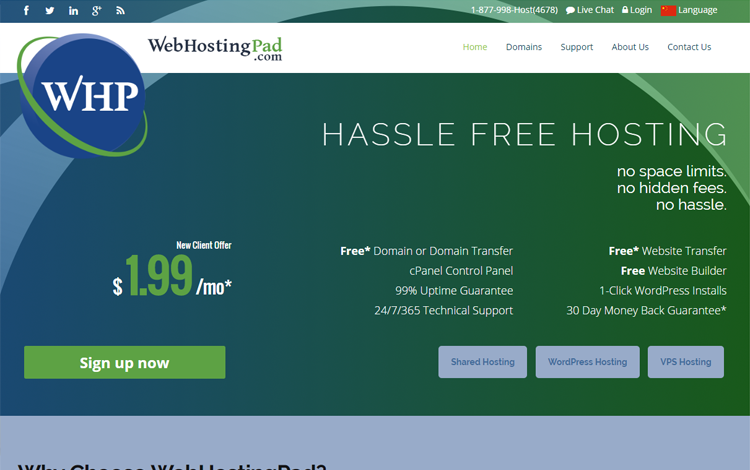